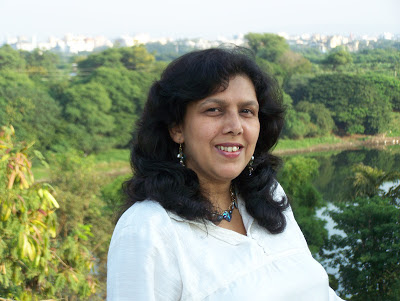 Manjiri Prabhu is a talented mystery writer based in Pune, India. Her books have been published in India and the US. Some of her works have won awards and commendations from prestigious organizations worldwide.

Her published books include a. A Symphony of Hearts, Silver in the Mist, The Cosmic Clues, The Astral Alibi, and The Cavansite Conspiracy. She is also the author of Roles: Reel and Real, a non-fiction book on the role of women in Hindi films.

Manjiri Prabhu is currently working on two young adult novels, The Gypsies at Noelle’s Retreat and The Gypsies on the Eurail.

By day, Manjiri is a Children’s Television Producer and a short filmmaker. In her spare time she is deeply involved in Animal Welfare and well-being. She took some time off from her busy schedule to answer some questions about her writing life for Suprose. Here are some excerpts.

Why did you become a writer? Why do you write?
I write because it is my instinct. I can’t help but write. And I discovered this urge very early in life. What channelised this urge on a conscious level were my early reading habits. I grew up, like many of us, on Enid Blyton, Nancy Drew and Agatha Christie books. And I dreamt of creating fictitious worlds which would seem more real than real. I knew at age seven that I wanted to be a writer and since then I’ve been struggling to be one.

What motivates you, makes you want to write?


Firstly, the need to tell a story. And secondly, the craving to create memorable characters, a world which is entirely mine but which will grow beyond me and last beyond me.  Ultimately a human being lives on in the form of memories which are passed on from generation to generation. I would love to create a world which would create similar warm memories in the minds of the readers. If the readers would allow my characters into their hearts, and if my novels could live on, side-by-side with their own real-life, personal memories, I would feel honoured and blessed. This thought gives me a sense of satisfaction and prods me to write more.

What are the tools you use to inspire yourself? As in writing excercises, music and such?
Walking and lots of it. Then music, free-style dancing, playing with my dogs, interacting with my family and friends and lastly, whenever possible, traveling. Other than these, life in itself and its mysteries is a huge inspiration. The many unanswered questions, the twists and turns, the unpredictable and the unexpected, the enigma – everything to do with life is a full-on inspiration to write.

You write primarily mystery, why did you choose this genre?
Early in life I was influenced by Enid Blyton and Agatha Christie. This served a dual purpose – it not only provided me with my first inspiration to write but also handed me the genre on a platter. I loved mystery and I loved the way the children would have adventures and enjoy themselves. I was an avid reader and I knew then that this was what I wanted to write about – fun, adventure-filled stories which claimed that anything was possible, that good always triumphs over evil. On a deeper level, the mysteries introduced me to the games people play and the depth of the human psychology. Mystery is a genre which may appear blatantly simple at face value. But it has so much more to offer.  It is an all-encompassing genre – it absorbs other genres within it. The insights into a human psyche, political upheavals, societal attitudes and issues, gender complexes, relationships and many more subjects can fall within the realm of this story-telling. Mystery writing provided me with the perfect platform to tackle various issues as well allowed me to garner readers of all ages from all strata of society.
And finally, writing a mystery novel is a challenge. It has to be written from three points of view – the Author’s POV, the reader’s POV and the POV of the Characters. The Author ‘knows’ it all but has to pretend that he/she doesn’t; the element of surprise has to be retained throughout the novel for the reader and finally, the multiple layers of the characters have to be enigmatic and keep the mystery alive. It is the perfect equation between ‘pretense’, ‘surprise’ and ‘enigma’ which results in a good mystery novel and finding this balance is the real challenge, which I find fascinating and fulfilling.

How does it feel, to be a successful published writer of whom expectations are different, versus a writer who just wrote just because?
The fact that I am published doesn’t alleviate the anxiety that goes hand-in-hand with the process of writing the novel and getting it published. I experience the same anxiety pangs today which I suffered during my first novel. As far as the expectations go, yes, it’s a pressure. Not only because my readers expect a certain standard from me, but also because I myself would want to do better than my last effort. The pressure is also a trigger. A trigger to go beyond my boundaries, push my imagination farther than what I’ve already achieved and write as I’ve never written before.

Do you believe creativity is stifled when prose is categorized and clubbed into genres?
I believe that when a novel is destined to be born, nothing can stop it. Similarly, if I’ve chosen a genre I like to read and the ideas come instinctively to me, the genre is in fact supporting the creativity in me. Creativity can be stifled only if a writer chooses to create a contrived work with a specific market in mind, in a way like writing to a gallery, or if he deviates from his natural instinct. It isn’t the genre then, but his or her attitude which could smother the creativity in him.

Many writers tend to be solitary animals, not savvy sales or marketing folks. For them toughest part is the sell. How did you navigate through this?
This is so true of me. I am a solitary animal. I love to be with my characters and in my fictitious world. But this just isn’t enough anymore. If you want people to be aware of your book - leave alone read it - you have to take much more effort. And I find this extremely difficult - to step out and to promote your work. Today’s definition of success is a result of skillful and smart marketing gimmicks. If you are good at it, you are successful. Reaching out to readers and interacting with them is a good thing. But promoting yourself almost like a brand, changes the focus from your work to yourself. I am still clueless as to how to work around this. 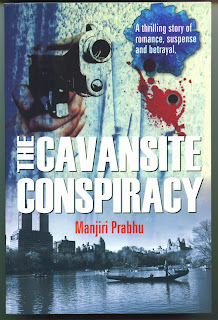 You recently won an award, can you give the details? Any other awards you have won? Please list them.
‘The Cosmic Clues’ was selected as a ‘killer Book’ by the Independent Mystery Booksellers Association of America, in 2004.
The Astral Alibi was honored as a ‘Notable Fiction book’ in the ‘Kiriyama Prize, 2006’.
And now recently, The Butterfly & the Bee (BTB), a literary organization (in New Delhi) launched its first Indian literary awards based on readers’ feedback. ‘The Cavansite Conspiracy’ was awarded the Best Mystery Book of 2012.

What do you read – for pleasure and for motivation?
I read everything that I can lay my hands on – from magazine, children books to spiritual ones.

If I were to look through your bedside reading pile what would I find?
An Enid Blyton book, an Agatha Christie, A Deepak Chopra meditation book and probably a Victoria Holt or a Jane Austen.

What is your next project? What are you working on?
I am working on a YA mystery series with Times Group Books. The first title is due for release in Feb/March 2013 and is called ‘The Gypsies at Noelle’s Retreat’ – A Riva Parkar Mystery. This story takes place in Giverny and Paris. The second novel in the series is titled ‘The Gypsies on the Eurail’ and as the novel suggests, the Gypsies will be traveling through Europe and Riva Parkar, the main protagonist will solve a mystery. I am also working on a futuristic fantasy for another publisher but the project is right now tightly under wraps J