On October 15, over a hundred celebrated authors and presenters will gather in Copley Square for the third annual Boston Book Festival. We have curated a program this year that features several Pulitzer Prize winners, some of the foremost Civil War historians, political leaders, world-renowned scientists, thought leaders, stars from the world of children’s literature, celebrated novelists, poets, philosophers, and steampunkers in full regalia. Our goal is to provoke, elevate, delight, amuse, and inspire you. Click here to view the full lineup, and start making plans now to attend BBF 2011. Suprose will be there...
Posted by Visi Tilak at 9:01 PM No comments:

The longlist for the 2011 Man Booker Prize for Fiction - the ‘Man Booker Dozen' - is announced today, Tuesday 26 July. The 13 books on the list include: one former Man Booker Prize winner; two previously shortlisted writers and one longlisted author; four first time novelists and three Canadian writers. The list also includes three new publishers to the prize - Oneworld, Sandstone Press and Seren Books.
The titles were chosen by a panel of five judges chaired by author and former Director-General of MI5, Dame Stella Rimington.
A total of 138 books, seven of which were called in by the judges, were considered for the ‘Man Booker Dozen' longlist. They are:
Julian Barnes The Sense of an Ending (Jonathan Cape - Random House)
Sebastian Barry On Canaan's Side (Faber)
Carol Birch Jamrach's Menagerie (Canongate Books)
Patrick deWitt The Sisters Brothers (Granta)
Esi Edugyan Half Blood Blues (Serpent's Tail - Profile)
Yvvette Edwards A Cupboard Full of Coats (Oneworld)
Alan Hollinghurst The Stranger's Child (Picador - Pan Macmillan)
Stephen Kelman Pigeon English (Bloomsbury)
Patrick McGuinness The Last Hundred Days (Seren Books)
A.D. Miller Snowdrops (Atlantic)
Alison Pick Far to Go (Headline Review)
Jane Rogers The Testament of Jessie Lamb (Sandstone Press)
D.J. Taylor Derby Day (Chatto & Windus - Random House)
The chair of judges, Dame Stella Rimington, comments:
'We are delighted by the quality and breadth of our longlist, which emerged from an impassioned discussion. The list ranges from the Wild West to multi-ethnic London via post-Cold War Moscow and Bucharest, and includes four first novels.'
The four first time novelists on the list are Stephen Kelman, A.D. Miller, Yvvette Edwards and Patrick McGuinness. Canadian author Alison Pick, like McGuinness, is a published poet and is joined by fellow Canadians, Patrick deWitt and Esi Edugyan, on the longlist.
The list includes one former winner, Alan Hollinghurst, who won the prize in 2004 for The Line of Beauty. He was also shortlisted in 1994 for The Folding Star. Two previously shortlisted authors also make the list: Irish writer Sebastian Barry (The Secret Scripture, 2008 and A Long Long Way, 2005) and Julian Barnes (Arthur and George, 2005, England, England, 1998 andFlaubert's Parrot, 1984). Carol Birch was longlisted in 2003 for Turn Again Home.
The shortlist of six authors will be announced on Tuesday 6 September at a press conference at Man Group's London headquarters. The winner of the 2011 Man Booker Prize for Fiction will be announced on Tuesday 18 October at a dinner at London's Guildhall and will be broadcast on the BBC.
The winner will receive £50,000 and each of the six shortlisted authors, including the winner, will receive £2,500 and a designer bound edition of their book.
The judges for the 2011 Prize are writer and journalist, Matthew d'Ancona; author, Susan Hill; author and politician, Chris Mullin and Head of Books at the Daily Telegraph, Gaby Wood. Dame Stella Rimington is the Chair.

Posted by Visi Tilak at 7:49 PM No comments:

For readers of South Asian Fiction, Chitra Divakaruni needs no introduction. Her writing is mesmerising and lyrical and extremely addictive. My personal favorite is Palace of Illusions, which is the story of the Mahabharatha, narrated by the female protagonist Draupadi. 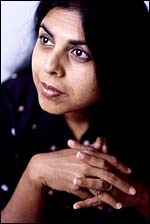 One of the most read South Asian American writers, Divakaruni's last book "One Amazing Thing" was very well received. Suprose was thrilled to have this Tête-à-Tête with Chitra Divakaruni.

1. You have written contemporary fiction, historical fiction, young adult fiction and poetry, very different writing forms… How do you switch hats, moving from one to another with so much ease?
It's not really easy. Before I start a new form I have to think awhile, read some good examples in that genre, re-pace myself, remind myself why I want to change to another form, etc.
2. Which of your books so far did you find most challenging to write and why?
Each is challenging in a different way. Perhaps Palace Of Illusions was the most challenging, because it retells the ancient myth the Mahabharat from a woman's point of view. I had to do a lot of research, a lot of reading, I had to find a suitable voice for Draupadi so she could be queenly & mythic as well as contemporary. I had to retell the story in a way that would still be of interest to someone who was already familiar to it, and yet not confusing to someone who had never read it.
3. There are many successful writers out there without a formal MFA, and many who have an MFA. How does this MFA degree matter, in the overall formula for being a successful writer?
The MFA program is a great help in many ways. It gives you a writing community, 2-3 years of continuous workshop experience, which means people are reading your work carefully & giving you feedback to alert you to your strengths and weaknesses. You read a lot, both literature & craft, and you learn many techniques & how to apply them. You are able to work one on one with good teachers. You make connections with other writers that could last for years, with you reading each other's work even after you graduate. On a practical level, your professors can connect you up to agents & publishers & quality journals & help you find jobs.
4. Good readers make good writers. Please list at least three authors and/or books that you think are "must reads" for aspiring fiction writers and please explain why?
This is of course very personal. Three authors that I have learned a great deal from are Tagore, Tolstoy, and Maxine Hong Kingston. I recommend them to my students.

5. What have been the challenges and rewards of seeing your books being made into movies? Why? Have you had a hand/say in any of the screenplays?
I've only been an informal consultant for the films of Mistress Of Spices (English) & Sister Of My Heart (Tamil)--and that's all I wanted to be. The reward is that it brings you new readers. The challenge is that often you might not agree with the director's interpretation. For me, overall it has been a good experience. And of course it's exciting to see your work in a whole new way.
6. What are some challenges faced by multicultural writers who target a mainstream audience that is new to some cultures and ways of life?
You have to make your work accessible and yet keep it authentic. You should never explain cultural information, but nor do you want your reader to be lost. And your readers who are from your own cultural background should not feel alienated.
Posted by Visi Tilak at 10:38 PM No comments: