Indu Sundaresan is author of several historical works of fiction, including the Taj Trilogy surrounding the Taj Mahal and Mehrunnissa. She is a self taught writer who has also published a book of short stories. Indu is a fine storyteller and her books have been translated into about 20 different languages. Indu Sundaresan lives in Seattle, WA.

Indu Sundaresan’s sixth work of fiction, The Mountain of Light, which was released in October 2013, traces the bloody and tumultuous history of the Kohinoor diamond—in its last Indian owners, rulers of the Punjab Empire, and how it was secreted from India to England to adorn the arm of Queen Victoria.

Indu took time out of her busy schedule and talked to Suprose about her writing and books in general.


What motivates you to write and tell stories?

I haven’t analyzed this before—it’s the first time, I believe, that I’ve been asked this question! It may possibly be that most writers take a particular situation and imagine all possibilities around it—you make up stories, you think of motivations, the why, the what, the when, the how.  And then, the only way to give coherence to your thoughts is to put them down on paper.

I began writing on what seems to be a whim.  I’d finished graduate school, had degrees in economics and operations research and thought it would be fun to write a novel.  So, I wrote two, and then I wrote my first published novel, The Twentieth Wife.

Are you self-taught or did you get an MFA, attend any other writing courses?

I’m self-taught, in that I think all the regular, formal education we get, right from birth, ought to be enough to be able to write a book.  We’re taught to communicate right from the beginning, and all writing’s a form of communication.

It’s much more stylized than that—but the basic tools exist in all of us.  When I began writing, my education was in other fields, but I’d always been a big reader, read widely, read a lot.  So, in some way, that was also a form of education for this particular field.

I think MFA programs are great—no doubt about that.  But, I was on a panel with the director of one of the well-regarded MFA programs in the US, and the director said what I’ve thought to be true all along.  She said (I’m paraphrasing here) that all the students of their program are accepted in because they come with novels, collections of short stories, essays, already finished.  What the MFA teaches you then is to edit, to revise, to revisit your work with a new set of tools—what works, what doesn’t, what needs to be rewritten, what kept, what thrown away.

Any training specifically for historical fiction? (in terms of classes you attended and such)

No, none.  I did take writing classes for about five years, from local community colleges in the Seattle area.  But, when I took my first class, I’d already written four novels—my first two attempts, which I discarded, and The Twentieth Wife and The Feast of Roses, my first two published novels, and the first two novels of my Taj trilogy.

The writing classes I took were general ones: plot, structure, character development.

I don’t think you need a specific historical fiction writing class, but I do think that once you’ve written your novel, it can be a splendid way to learn just how much of history to put in, how much fiction, how to meld the two.  I didn’t have access to something like this, so I made do with what I had.

You have written contemporary as well as many books of historical fiction? What are the challenges of each of these genres?

My collection of short stories, In the Convent of Little Flowers, is set in contemporary India.  All of my novels are historical fiction.  So, for me at least, the challenge was not so much about the time period but about the two fictional forms—the novel vs. the short story.

Short stories have their own style; they are limited, most obviously, by a word count, whereas in a novel you could potentially go on for a good number of pages.  In the short story, I pick an event and build a story around it—the past comes in, the future will figure in also, but it’s really about the present.  In my novel-length fiction, every time period has the opportunity to be rounded out.

Why do you do historical fiction more often than contemporary fiction? What about it appeals to you the most?

This question I have pondered upon quite a bit, and I think the most discernible reason to me, is that when I write about India’s history, I take a story and retell it.  When I do so, even though it’s a world we all know of, or understand in the whole if not in detail, I’m still building an entire new world.

This may go back to my love of reading, because one of the things I most enjoy about embarking on a new historical novel is the reading I do for my research.  I’ll stray from what I think to be the main storyline in all directions, and will find little nuggets of information that are unusual, that could well be put into my novel.  And, that’s how my books take shape, for a long while in my head, on paper in my notes, within my reading…all of this before I actually start writing the book.

What do you find most demanding about writing historical fiction?

Even after having written five historical fiction novels, I still struggle with what to put in from all I’ve read, and what to leave out.

It’s a healthy process though, because then I think deeply about the subject matter, the events, the characters and how they move around in the storyline, what affects them, how they react to it, or not. 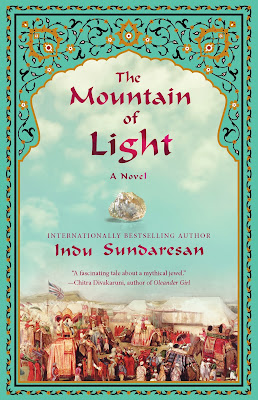 How did “Mountain Of Light” come to be? Why this story and what fascinates you most about this story of the Kohinoor diamond?

I’ve been trying to remember the genesis of this novel and it still isn’t very clear to me.  When I write a novel, it has usually been gestating in my head for a very long while—if I were to put a timeline on it, I’d say it takes about four or five years to finish a book.  All the while, I will be reading for and writing another book.

So, for The Mountain of Light, I’m not exactly sure.  The first thought began, of course, with the Kohinoor diamond itself.  The fact that it was taken out of India in 1850 as a ‘gift’ to Queen Victoria and that India has always, in some form or the other, asked for the diamond back.

In reading for this book, I realized that the Kohinoor has this deep reach into Indian history—mythology puts it in the hands of Lord Krishna, and it resurfaces about once a century in the hands of various rulers of India from about the 13th Century or so.

The timeline was too scattered to make sense in a novel’s setting, so I started reading about the Kohinoor’s last 50 years in India—who had it last, what it meant to them, how they lost it.  And I discovered a veritable jewel of information that in turn informed the events, characters and emotions in The Mountain of Light.

To me, this isn’t a revelation—I think you can write about anything, set it anywhere, in any time period, and if the book’s good, then just that, the book’s good.

How do you pick a book that you want to read? The cover, synopsis, something you might have heard about it?

It’s a little bit of everything.  It could be a great review, but most often for me, it is what the book’s about, and if it’s a writer I already know, have read before, then I’m eager for the new book.

Name 3-5 books you read recently and which ones you liked or did not like and why?

Raj: The Making and Unmaking of British India; Hilary Mantel’s Bring up the Bodies; The House on the River.

I don’t speak (in public) of what I don’t like in books—I’m in the business and being on the other side, I know what it takes for an author to write/revise/publish a book.

What are some tools/exercises that you use to break out of writers blocks?

I read a lot of books on the craft of writing.  When I’m stuck, if it is while I’m writing a novel (which is very rarely) I will usually put the manuscript away, either read other fiction, or books on writing.  I’ll do the exercises in the books.  Sometimes, I’ll write a short story to fill up the time.

It’s rare though, for me to have to put a novel away while I’m in the midst of it—I’ll usually worry out the plot/character, whatever it is that’s blocking me, in my mind until I can begin again.

The role of an author is becoming larger, we have to do more than just write, go on book tours and read from you book. What are some of your thoughts on Author as a marketer?

It is a necessary part of the book business now, as you say. So, the thing to do is to embrace the marketing aspect.  For me, personally, I find that it does take away from being engrossed in my next book.  So, I’ll jump into the publicity aspect of the novel, once it’s on the shelves (and a fair bit before, because a lot of preparation is usually required before the book’s published).  But once I’m writing a new novel, I shut off all distractions until it’s done.