The creator of two web sites: Gender Equality Bookstore, which features books for children that shatter gender stereotypes (www.GenderEqualBooks.com), and Second Generation Stories, which highlights novels and stories written by children of immigrants (www.SecondGenStories.com), Jyotsna Sreenivasan is most recently the author of the novel "And Laughter Fell From The Sky."

A daughter of Indian immigrants, Sreenivasan was born and raised in northeastern Ohio. She earned an M.A. in English literature from the University of Michigan. Her short fiction has appeared in numerous literary magazines, and she has received literature grants from the Washington, DCCommission on the Arts and Humanities.

Sreenivasan has written two novels for children: Aruna’s Journeys and The Moon Over Crete. She is the author of several nonfiction books: Ela Bhatt: Uniting Women in India,  Utopias in American History, and Poverty and the Government in America.

She currently lives in Columbus, Ohio, and was kind enough to answer some questions for Suprose.

Your books are about gender equality. Any reason why you are especially interested in this subject?


Yes, many of my books deal with the subject of gender equality. What can be more important than our relationship with the other gender? Are we equal, or is one subservient to the other? This is a central question for humanity.

The article in The Atlantic titled “Why Women Still Can’t Have it All” has been raising several eyebrows. Your thoughts on how one should approach this and how to interpret this to young adults?

I think the article should have been titled: “Why Women and Men Still Can’t Have it All.”

The author, Anne-Marie Slaughter, points out that it is impossible to “be there” for your children when your high-profile job requires you to be away from home all week. Men with jobs like this can’t have it all, either, but traditionally many men have not had a goal of spending more time with their children, so perhaps they didn’t notice what they were missing.

I think young adults will have to take the lead in creating a society in which both women and men can have a balance of work and family life. No one can be balanced and equal in a society that was originally designed for male dominance.

When did you get interested in writing and how did you get to writing your first couple of books for kids?

I’ve been interested in stories since I was a young child. I remember, as a preschooler, looking at print and cursive and being so frustrated that I couldn’t read it. I was so happy in first grade to learn how to read!

I wrote my first story in 2nd grade. When I was in college, I never thought about writing for children, but after graduate school, when I was working at my first job, I decided to try writing a novel for children. I wanted to work on the basic elements of a story: plot and characterization. Child readers won’t put up with a book just because it has beautiful language or descriptions. They want a real plot and engaging characters. I thought that writing for kids would be a good education for me in those areas.

Did you take any classes? How did you hone your writing skills?

I have a BA and MA in English literature. Becoming familiar with great literature was a wonderful education. I have also taken writing classes, attended writing conferences, and participated in informal writing groups. All of these helped me with my writing. The most important thing I do, though, is to make time to write on a regular basis.

How did the transition from children’s books to those for grown ups occur?

I just decided to try writing a novel for grown-ups. Little did I realize how hard that would be! For years, I worked on writing and revising my first manuscript, but was not able to get it published. Then I started on my second, and again, that one is still living quietly on my computer. Writing both of these was a wonderful education for me. My third manuscript became the novel And Laughter Fell from the Sky.

Was the writing experience for both of these audiences different? How?

In terms of fiction, whether I am writing a short story or novel, and whether it is for kids or adults, I start the same way: I have a germ of an idea for a situation or character, and I just start writing and see where it goes. Often the end result is quite different than what I started with. The process of writing fiction, for me, is one of exploration, and trial and error. 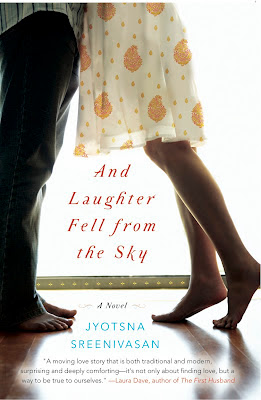 What is your book And Laughter Fell from the Sky about? What was the impetus for this book?

And Laughter Fell from the Sky is a love story about two twenty-something Indian-Americans. Both of them are looking for a partner, and both are also looking for their role in life. This book is inspired by the classic novel The House of Mirth by Edith Wharton, which is about a young woman in fashionable New York City in the late 1800s who feels compelled to marry a certain kind of person in order to fit in to her social circle. This reminded me so much of the pressure young Indian-Americans face to enter into an arranged marriage. I wanted to write a modern novel with Indian-American characters which explored some of the same situations as The House of Mirth. However, my book stands on its own, so you do not have to be familiar with The House of Mirth in order to  read And Laughter Fell from the Sky.

What did you enjoy most during its writing and publishing cycle?

I enjoyed everything except the process of searching for an agent! It’s like looking for a job, but even harder. I love the process of writing, but once you feel you’re ready for publication, you send out dozens, even hundreds, of query letters, and most are rejected. Fortunately I was able to land a wonderful agent. I really enjoyed working with her and with my editor to make revisions. It was fun working with the marketing team to launch this book. The whole publication process was just a lot of fun.

Who/What do you turn to for motivation in general, and while writing?

Almost anything can be an inspiration for me: other books and stories, the situations in my life, and the people I meet.

Who are some authors that you read? Who/what would I find on your “To Read” pile?

I feel like I’ll read almost anything, including my 10-year-old son’s graphic novels (some of which are hilarious, by the way). Right now I’m working my way through a book on the evolutionary underpinnings of fiction. I’m also enjoying Jennifer Weiner’s new novel, The Next Best Thing.

I have a new job as a middle school English teacher, so I’m completely absorbed with that right now. I’m also working on a new novel manuscript. A draft is with a couple of readers right now.