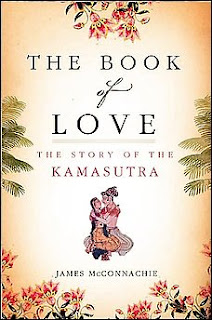 The Kama Sutra does not fail to create interest, each time it is
interpreted. The newest interpretation by James McConnachie titled
"The Story of Kama Sutra" is receiving rave reviews for it's precision
and prose.

"McConnachie has written an altogether first-rate work of intellectual
history for ordinary readers. Throughout he reminds us that The
Kamasutra is a repository of both ancient Indian culture and of modern
sexual daydreams (most of the postures being either uncomfortable or
impossible). In the end, though, The Kamasutra itself recognizes that
the ultimate transports lie beyond the teachings of art: "When the
wheel of sexual ecstasy is in full motion,/there is no textbook at
all, and no order," says the Washington Post review.

"Years ago, a bunch of us were sitting around drinking when I heard a
friend murmur two sentences I have never forgotten. "You know, guys,
sex is the greatest thing in the world." He paused and we were all
about to nod in agreement. He was, after all, a noted and
knowledgeable ladies' man. Unexpectedly, though, he then added, with
infinite wistfulness: "But it's just not that great."

There, in that gulf between the reality and the dream, lies the domain
of pornography, the sex industry and the masturbatory fantasy -- of
Viagra and the midlife crisis. Our Western myths of love are seldom
about fulfillment; they are all about yearning. In Plato's Symposium
we are told that the gods divided the original ball-like human beings
in two, and that we consequently spend our lives searching for the
other half who will complete us. So-called romantic love, which first
blossomed in 12th-century France, revels in passion delayed, forbidden
or otherwise thwarted. Its real theme is desire.

But for the Western imagination, the East has long represented an
escape from this pervasive sexual unhappiness. Baudelaire spoke of
tropic realms of "luxe, calme et volupté"; Hawaii and Tahiti once
beckoned as Edens of innocent voluptuousness. From the 18th century
on, the Orient, in general, seemed a perfumed garden, offering the
tender attentions of geishas, bare-breasted island girls and pretty
boys. Here, amid erotic graciousness, the darkness of sin was unknown.
And yet, even this scented, sensual wonderland turned out to have its
guide, its bible: The Kamasutra, sometimes subtitled "The Hindu Art of
Love," says the Post adding that, "McConnachie reminds us that the
original text of The Kamasutra wasn't enhanced by illustrations, and
only in modern times have editions used Indian temple sculpture or
Persian-style miniatures to depict innumerable and unlikely
interlacements. Similarly, the original Kamasutra has nothing to do
with the practices of Tantrism -- the latter's religious adepts
performed their sex-magic without feeling desire. The book does,
however, briefly allude to male homosexual practices and closes by
offering unlikely recipes for restoring sexual vigor, ensuring
fidelity or ending an affair."